When Should Company Computers Be Replaced? 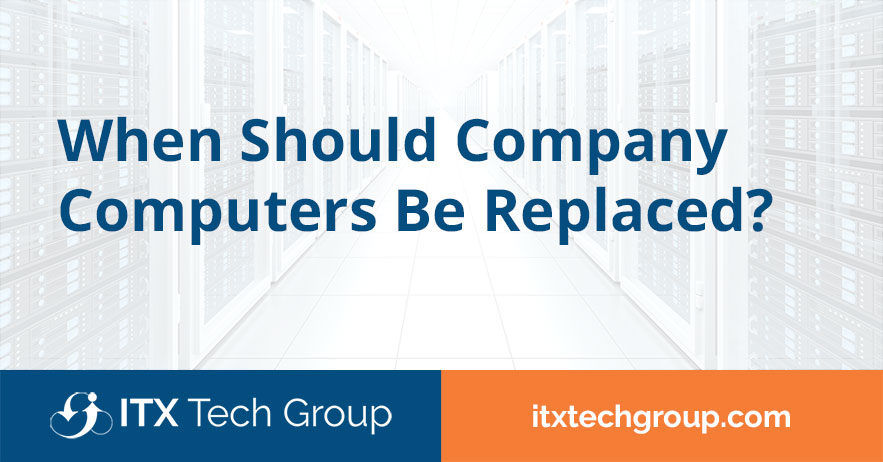 It can happen out of nowhere. You come into work, fire up your computer, and find it non-responsive.

The lifespan of a computer is almost like a car tire. It can stop working at any moment without warning. Ideally, you’ll have a plan in the unforeseen event of a crash, and it might result in replacing your computer(s).

However, sometimes it’s hard to tell when a computer needs to be replaced. Read on to learn how to assess your computer’s lifespan and determine when it’s time for a replacement.

Rather than wait for your computer to completely break down, be proactive in recognizing the various signs that it’s near the end of its lifespan. This includes both the machinery as well as the software.

Abnormal noises such as clicking, or hissing could indicate mechanical issues. If you notice a computer slowing down, especially after software updates, this could be due to gradual hard-drive decline. It becomes overloaded and struggles to keep up storing new information, which isn’t unusual for outdated models.

Keep in mind all computers experience minor hiccups occasionally. The first time you notice any of these issues, you’ll want to start monitoring them. Try restarting your computer to see if they subside.

As computers age, remind employees to organize their hard-drive storage every now and then. There are likely files and software programs no longer needed that can help free up space.

If you feel like your company computers are on their last leg, check the warranty. Depending on the circumstances, they may be covered by the manufacturer which would save you from having to pay for new ones.

Standard warranties usually only cover hardware failure but are good for at least one year. However, accidental damage such as spilling coffee or downloading a virus typically isn’t covered. Some computer manufacturers, however, offer protections to cover those type of incidents.

Since the average computer lifespan is between 5 to 6 years, opting for an extended warranty coverage could be beneficial for replacing computers in the future.

A declining computer may not always need to be replaced. If the hard drive fails then you could be out of luck, but the issues could stem from other factors that don’t require fully replacing your computer. It could just need a few simple upgrades.

Most current operating systems should alert you of any software updates. Don’t put these off as it can compromise the speed and ability of your hard drive.

Additionally, broken parts such as a keyboard, mouse, or cracked screen can easily be replaced at a much lower cost than upgrading an entire computer system.

Replacing a computer can be costly. Sometimes it’s absolutely necessary. Regardless, always consider all options to determine what’s in your best interest.

Before you go tossing a computer out, contact the manufacturer to address the issue. They may be able to assist and provide instruction on how to fix the problem.

You could also consult with local repair shops, just make sure they’re licensed. Even if your computer is unrepairable, they may be interested in buying it for spare parts. At the very least you could salvage working parts for backup in case other employees need them at some point as well.

Getting the Most Out of Your Computer(s)

How often you should replace your computer depends on many factors. A computer used properly should last up to five years or more, but there’s no one size fits all answer. If your computer works flawlessly year after year, then there’s no problem to go chasing.

Computers used every day with multiple software will likely wear down faster than ones used a couple of times a week for simple tasks like email and web browsing.

There are steps you can take to enhance computer lifespan.

Shut it off when it’s not in use, especially for laptops so the battery doesn’t run down. In addition, choose a model that’s compatible with the type of work you’re doing so the system can keep up without overloading.

If your business is in-need of upgrading or replacing it’s computers and you don’t know where to start, get in touch with us to see how we can help.