Microsoft Word vs. Google Docs: Which is Best for Business?

How much do you need out of a word processor? With Microsoft Word or Google Docs, it depends on what you are trying to accomplish.

When considering whether your business should use Microsoft 365 or Google Workspace, the difference between each’s word processing applications could be the make or break factor.

Microsoft Word and Google Docs both serve as cloud-connected writing hubs, but the importance of your documents could shape your decision.

As users will see across M365 and Workspace, the difference between desktop and web apps is about balancing some of Microsoft’s deeper features and Google’s focus on collaboration.

In this post, we will look at some of the key differences between Microsoft Word and Google Docs, breaking down how the benefits and drawbacks of each could affect your teams’ workflow.

Microsoft 365 and Google Workspace are priced per user, per month, and have different tiers of pricing. As it pertains to Word and Docs, the difference in tiers generally only affects storage space and availability of the Word desktop app.

The desktop apps are not available through Microsoft’s Business Basic plan ($5/user/month), so users at that level will have to be satisfied with Word Online.

Microsoft offers its apps for as low as $8.25/user/month, but users then lose out on other functions like Microsoft Teams, SharePoint, and Exchange Online.

Meanwhile, every Google Workplace subscription comes with all its web apps. Google does not have downloadable desktop apps, and all must be run out of a web browser.

As for how much drive storage is available across all these subscriptions, see the graphic below: 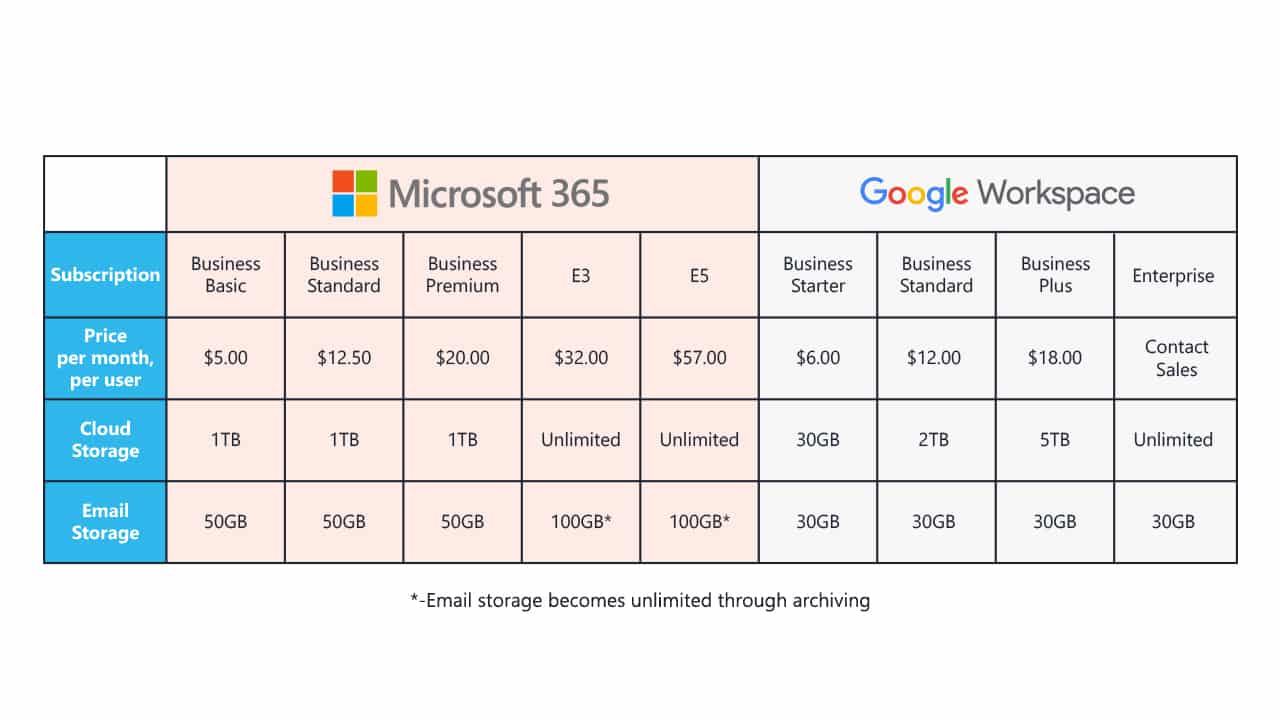 Text documents are not likely to make much of a dent in your overall storage, except maybe on Google’s starter plan with only 30 GB of drive storage.

One TB of space on Microsoft’s most inexpensive offering would be more than enough to house all of your Word documents and plenty more.

Overall, the features across both M365 and Workspace will determine which one of these prices works for you.

It is important for us to note that the pricing in the above image is only relevant until February 28th, 2022. Starting on March 1st, 2022, Microsoft has stated that their pricing structure will change.

Below you will find a brief list of new pricing for the following commercial products.

Not every company needs comprehensive features for writing documents, but if you use your word processor to write more than one-page reports, there is a chance you will.

Google Docs is a great application for college students who want to be able to write standard papers with little formatting that they can access from anywhere they have an internet connection.

Anything more than that, and Docs doesn’t hold a candle to the power of Word. It all comes down to if Docs is enough.

Docs does have some features that Word online does not, like the ability to edit text styles that you use consistently, as well as an insertable table of contents.

The desktop version of Word has all the features missing from its online offering, meaning they should be added after the collaborative aspect of the document is finished.

However, Google’s offering does not allow for specific adjustments to paragraph spacing or paragraph marks at all.

Word also has a deep library of templates that help to create the most visually striking documents you can. This makes design simple, as the user only needs to replace placeholder text and images, and input brand colors.

With the help of artificial intelligence, Word Ideas will make use of all its extra features to help users create the best document possible. This includes the layout and writing in total.

For example, Ideas may suggest a header format instead of manually bolding and centering text. Text suggestions may be to eliminate jargon or abbreviations in favor of clearer wording.

Think of this as the next generation of spellcheck, as it does more than just correct grammar, making your voice clearer.

Perhaps most importantly, Word and its desktop apps offer functionality across platforms. Those using Microsoft 365 can easily integrate their PowerPoint slides, Excel sheets and graphs, and other media from the M365 suite into their documents, and vice versa.

Additionally, once documents reach a certain length, like in the case of research or manuscripts, Google Docs becomes weighed down. Word is more adept at handling long-form documents without lag.

Considering that many businesses are already using versions of Microsoft applications, this allows better crossover when working with other companies.

M365 users will likely have fewer issues opening documents from other companies, a million of which also use Word worldwide.

When it comes to features, Word and all of Microsoft 365 will take the crown.

Desktop apps have the capacity to house far more functions than a web app, and that can be seen across M365 and Workspace as a whole.

The applications within Microsoft 365 were built as individual, fully formed programs, with the capability of online collaboration added later in their life. Meanwhile, Google Workspace was built with collaboration in mind, leaving some of the heftier features behind.

Both offerings can be edited by multiple people concurrently, saving to the selected drive almost instantaneously.

Word lags slightly in comparison to Docs, especially when working out of the desktop app. Originally, it was not possible to send a collaborative link in Word online, but that feature has since been added.

It is also easier to share documents quickly through Docs, and the ability to change permissions for other users appears immediately when trying to share.

That feature is just a bit harder to reach with Microsoft, and you must save the file to OneDrive to avoid versioning issues.

While the gap isn’t as large as some will make it seem, Google Docs is definitely better for collaborating within companies. It is important to remember that you might run into compatibility issues with other companies that do not use Docs. Though Google has said it will roll out compatibility with Microsoft documents since the launch of their web apps, they are yet to deliver on that promise.

Given that collaboration has been a focal point during COVID-19, expect both suites to continue to concentrate on growing in this area.

So, how much does a business need in their word processor? It depends on the intensity of your documents.

If you generally only take notes or write short internal documents, it may behoove you to take advantage of the collaborative aspects of Google Docs.

If your business exports longer manuscripts for proprietary research or uses very specific formatting, you’ll absolutely need Microsoft Word. If your business is sending documents to other businesses, Word and 365 should guarantee compatibility.

Keep in mind that the word processors are only one piece of the Microsoft 365 and Google Workspace productivity suites.

It is likely that you are not making your decision based solely on these applications, but the features found on Word could be absolutely necessary and force you toward M365.

ITX Tech Group has been leveraging the power of Microsoft 365 since 2011, and we have continued our partnership until the present day.

ITX Tech Group can get your business migrated to Microsoft 365 with no trouble by connecting with us today.