IT Security Is More IMPORTANT Than You Think! Here’s Why… 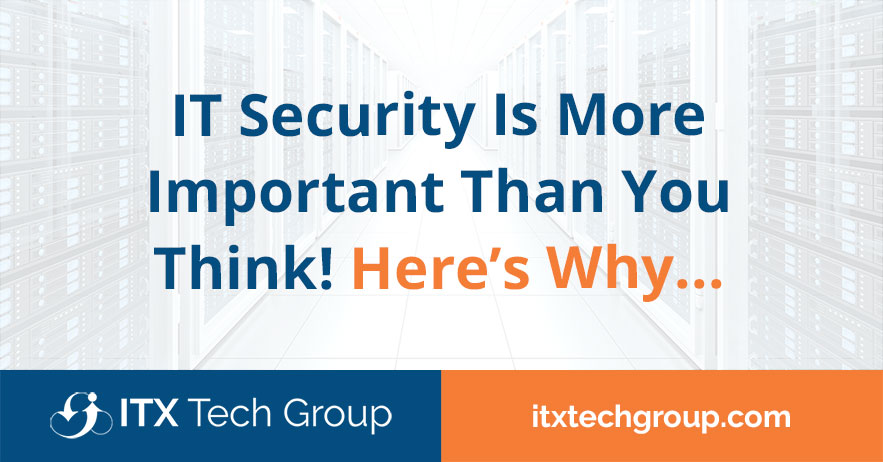 It wasn’t so long ago when your business could get away with protecting your computer with a simple installation of antivirus software.

Back then, there were only around 50,000 known computer viruses in the year 2000, but that number has since skyrocketed to an astounding 185 million unique variants of threats.

The truth is that there is far more out there in the online world than just simple viruses.

As a business owner, you need to be prepared for anything, as the number of threats on the Internet continues to grow at an alarming rate.

Know Who The Enemy Is

Many businesses simply don’t know what they’re up against, and they underestimate the value that their data holds for countless criminals out there. If they truly understood, then perhaps they wouldn’t be so nonchalant about it.

The truth is that a business that doesn’t understand the value of its data is constantly teetering on the brink of a disaster, always at risk of its data being compromised.

Believe it or not, hackers know all about the value that your data holds. Why would they go for it if they didn’t?

Personal data, contact information, credit cards, Social Security numbers, and much more are all at stake.

If passwords are taken, then accounts can be hacked to further spread influence.

This is something that no small business wants.

Think about it in terms of risk vs reward; if you were a robber, would you rather go for the bank that has tons of security and armed guards at the door, or would you rather hit the smaller bank that’s in a less conspicuous location?

It’s likely that the smaller payoff in a larger quantity will be worth more, as the risk is reduced.

This same logic is used by hackers, and it places small businesses at risk to the same degree as big corporations.

You might hear about big corporations suffering from huge data breaches, but let’s face it; that’s only because they are much more high-profile than small businesses.

There’s no reason why small businesses can’t fall victim to the same attacks.

It’s Not Just You

It’s important to remember that IT security shouldn’t be taken personally. The hacker isn’t out to get your specific business.

For all you know, you could be one address on a list of millions of recipients for a huge email blast.

It could have been from just something as simple as having a computer that isn’t patched properly, or another network device that’s vulnerable to threats.

The only reason you’re being targeted is because technology is susceptible to threats, and nothing more.

This is the biggest reason why businesses need to take an active role in keeping their IT safe and secure.

If your business is having trouble keeping up with IT and security, ITX Tech Group can help. To learn more, feel free to connect with us at any time!