Common Hacks And Threats Your Business SHOULD Be Aware Of! 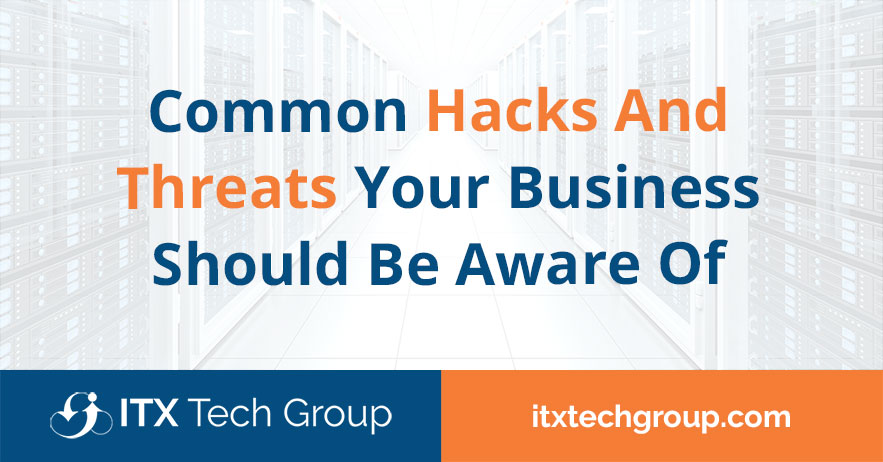 There are several threats out there that your organization’s users could fall prey to.

Below you’ll find a list of some of the most dangerous hacks and threats out there, as well as how your business can respond to them.

Malicious software is one of the oldest threats out there, and damage caused by it can range from minor to incredibly awful.

A particularly nasty variant is ransomware, which can encrypt files on your computer so that they are inaccessible to users. The user must then pay a ransom to unlock the files with a decryption key.

We always urge users to never pay the ransom, as there is never a guarantee that you’ll get your data back. Instead, we recommend preventative measures as the best way to make sure ransomware doesn’t become a problem for your business.

Be wary of spam messages, and make sure that you have a quality data backup and disaster recovery solution and are sure it works.

Phishing attempts, spread via email and spam, are also a considerable threat to be on the lookout for.

Phishing attacks are used to steal sensitive credentials and information from users by posing as someone else. While they are typically spread through email, attacks can come via phone or social media.

It’s critical to keep in mind that credentials should never be handed over to anyone via email, or in general.

If you cannot verify who sent the message internally, then be careful about sending any information to them at all.

There’s no doubt that you’ve seen the countless high-profile hacks out there that make great headlines with the media.

Sometimes these hacks will include passwords and other sensitive data that will be posted for sale on the dark web. Password hacks like these mean that millions of users could be put at risk at any given time.

The best way to avoid this is to change your passwords often, or whenever there’s an indication that they have been stolen or hacked.

Distributed denial of service attacks, or DDoS, are targeted attempts to launch so much activity at a server that it can’t possibly handle it all, thus bringing down whatever services or solutions are on it.

These attacks are often orchestrated by botnets, large groups of infected computers that have been rigged to launch traffic at the server or infrastructure and bring it down.

Man in the Middle

Man in the middle attacks occur when an attacker inserts themselves directly between communications between two parties. This can happen quite often over an unsecured wireless network.

A hacker can send data to both parties and interact with them, often without either party knowing.

Downloads can happen without the device owner’s consent. Pretty scary to think about, eh?

Malware or other threats can trigger the download by clicking on the wrong tab, a bad download link, or a dialog box.

Drive-by downloads are dangerous because the user has no way of knowing what they have just downloaded until it’s too late, meaning that it could be something potentially incriminating or dangerous.

ITX Tech Group can help you keep your business’ computers safe from threats of all kinds. To learn more about comprehensive security management, feel free to connect with us at any time!